When opening a moth trap that has run the previous night you can never be sure what lies within. There are mornings when you know immediately that the catch will be poor. Otherwise there is always a sense of anticipation, maybe this will be the day you find something totally unexpected. Maybe there will be a spectacular moth in mint condition. Maybe there will be an extreme rarity lurking below. Is it just possible there will be a moth that is all these things?

Imagine the Cholsey scene, it is early morning on 17th August. I stare in disbelief at what sits on the egg boxes. It is very early, maybe I imagine the whole thing. No it is true – there really are two pristine Spurge Hawkmoths staring up at me! I need an expert authoritive witness, so closing the trap quickly I await the arrival of Richard Lewington.

Many photographs later we wade through the rest of the trap but find nothing else of special note. Berkshire County Moth Recorder, Martin Harvey confirms that we have a first ever record for the county.

The three of us are searching for an explanation, no other records seem to be coming in nationwide. Then we recall that somewhere in the village lives an entomologist who specialises in hawkmoths. Richard contacts him and back comes the explanation that he accidentally released three Spurge Hawkmoths on August 16th. What a shame that the county’s non record for this species remains intact.
The following night I very unusually put out TWO traps and urge Alan Strange, a villager new to moth-ing to put out his trap. Maybe we will catch something special. To my disappointment my traps contain nothing of note. Then just after mid-day there is a very excited Alan on the phone. He has belatedly opened up his trap and found – yes a Spurge Hawkmoth. Photographs are examined later and Richard pronounces the latest specimen to be a different individual and not one of those caught previously. Not a great surprise given that Alan lives over a third of a mile away from Red Cow Cottage where my traps are. We mark Alan’s specimen before release with nail varnish so we can recognise it again.

Remarkable that we appear to have caught all the releases despite being some distance from the entomologist’s patch.
The stop press news is that on opening my trap on the morning of August 21st there was another Spurge Hawkmoth! Close examination suggests this was one of those seen on the 17th. This time the moth was marked, and now we have three moth-ers dotted around the village watching their traps very carefully for further developments.

Who says moths are dull! 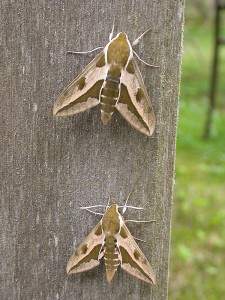