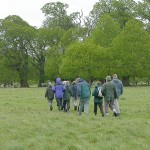 On Sunday 17th May, Janet and Jerry Welsh led a field trip to Crowsley Park and Kent’s Hill. The walk started from Sonning Common in light drizzle but the weather improved as the afternoon progressed. A large colony of Bee Orchids was found in a nearby field, together with Narrow-leaved Vetch and Changing Forget-me-not. Barberry and Hound’s-tongue were growing along the side of the next lane. Tormentil, Heath Speedwell and Sheep’s Sorrel were typical flowers of the acid grassland at the top of Crowsley Park, while Bird’s-foot Trefoil became abundant as the path dropped down onto the underlying chalk on the side of the hill. White Helleborine, Adder’s-tongue Fern, Twayblade and a Small Heath butterfly were seen in a grassy clearing on the chalk hillside at Kent’s Hill. A spider with a prominent longitudinal white stripe was identified as Pisaura mirabilis (Nursery Web Spider). On the way back, Orpine was found on a roadside bank. The bluebells on the north-facing bank were still in full flower, while those on the south-facing bank were past their best. 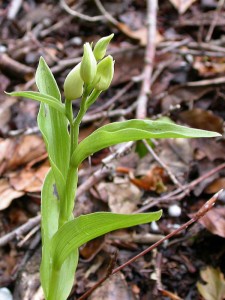