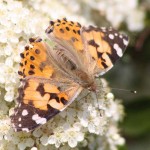 Member John Notton first reported seeing Painted Lady butterflies passing through his Caversham garden late in the morning on Sunday 24th May. A timed count in the Berkshire Downs near Compton on Monday 25th May gave 50 Painted Ladies in five minutes and a massive 224 were seen on a 2-mile walk round the village. Almost all were flying fast in a north-westerly direction. Strong winds later in the week grounded some of the butterflies, and they were observed to be nectaring on various flowers, including Pyracantha, bramble and Hemlock Water Dropwort.

EDIT (ChrisR): I’d just like to echo what Jan said above and add that my parents, who were RDNHS members but who have moved to Beaminster in Dorset, reported seeing hundreds of Painted Lady on Saturday 23rd all flying north and away from the coast. In addition, I have seen unusually large numbers of day-flying Silver-Y moths, which I also assume were migrants that rode the same migration winds that brought so many Painted Lady to our shores.