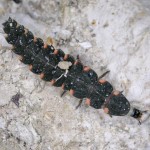 On Thursday 7th May, Martin Sell led an evening walk in cool and cloudy conditions at Aston Upthorpe in the Berkshire Downs. Cowslips were abundant, particularly in the grassland surrounding Juniper Valley. 6 plants of Field Fleawort were just about to come into flower. The fence around the Pasqueflower exclosure was no longer rabbit-proof and there were no flowers to be seen. Two plants outside the exclosure were examined carefully and both were found to have suffered grazing damage. Three big Barberry bushes were in flower and the dark blue flowers of Chalk Milkwort were dotted across the short turf. 2 pairs of Lapwings were seen on bare ground above the top of the valley. What appeared to be a dark spiky caterpillar walking across a track was identified as the larva of a Glow-worm. As the group returned in the dusk, Tawny Owls were calling in the adjacent woodland.

Pasqueflower Pulsatilla vulgaris (not in flower)