The first of the informal Wednesday walks of 2010 had to be cancelled on account of the snowy weather. For the Second, on February 17, the weather turned benevolent. There was sunshine, and the air was beginning to warm as the party of around a dozen, led by Alice and Eric Ayers, walked among the ancient trees of Crowsley Park. There were some interesting fungi and insects among the old timber lying around, but it was the birds and bird-sond that made the mroning really memorable. A flock of goldcrests was seen, there were skylarks singing above, nuthatches and green woodpeckers were calling among the trees – and then the unmistakable croak of a raven was heard. A member of the group, by imitating the croak, enticed a pair of ravens out of a cedar tree, where they couldn’t be seen, onto the bare branches of a deciduous tree, where they remained in full view for some minutes. They began to touch their bills and preen one another. Some cros obligingly flew by, so that the difference in size between a crow and a raven was at once apparent. It was a very happy group who enjoyed lunch at the Butcher’s Arms in Sonning Common afterwards. 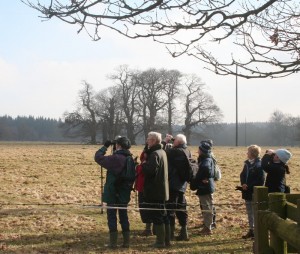