Watch out for the Wasp Spider 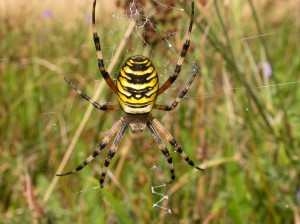 Jan Haseler recently told me that she had seen the Wasp Spider (Argiope bruennichi) in Moor Copse and that this was the second record for the site. I was quite surprised because this is a relatively new species for the UK and has been spreading up from the south coast but I wasn’t aware that they had virtually reached my doorstep.

This means that we, as a Society, should be on the look-out for more in our area. They are highly distinctive with a “2 legs at each corner” stance and a pattern of white zig-zags on the web above and below where the spider sits. If you get close to them they often wobble the web to and fro to scare off attackers but they are quite harmless, like most UK spiders.