Gromwell is one of the rarest species to be found in Basildon Park. It is a relative of familiar species such as forget-me-not and comfrey but is confined to chalky areas. It has rather inconspicuous greenish flowers in April-May but its most striking features are its seeds: these are small, very shiny, very hard and pearly white. They give the species its botanical name, Lithospermum, meaning stony seed. In the winter and spring when the leaves have decayed the seeds remain on the dead stems and a re very conspicuous. Gromwell is becoming more widespread at Basildon – this is not unconnected with visitors testing the hardness of the seeds during walks. 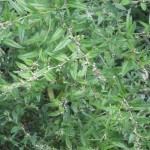 This year, the warm humid conditions have favoured the growth of fungi everywhere. Currently three different species of mushroom can be seen in Basildon Park, the very edible field mushroom, which grows in “fairy rings” in the grassland, the equally edible wood mushroom and the inedible yellow-staining mushroom. Fungi come and go rapidly – some parasol mushrooms have been and gone and the poisonous panther cap appeared in the bluebell wood. It is likely that other species will appear – oyster mushrooms on dead beech wood and wax caps in the open grassland. Fungi are fun!