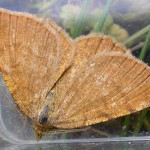 During the Society’s visit to Dry Sandford Pit (a nature reserve near Abingdon belonging to the Berks, Bucks and Oxon Wildlife Trust) on Sunday 31st May 2009, a small orange moth was found on a clump of Common Bird’s-foot Trefoil. It has been identified by Martin Harvey, the County Moth Recorder, as Rannoch Looper Itame brunneata. This is the first specimen of Rannoch Looper to be recorded in VC22 Berkshire. Britain has a small resident population of these moths in central Scotland, but the Dry Sandford individual is likely to be a migrant from mainland Europe, brought in by the recent north-easterly winds. Since the first Rannoch Looper was found on the Reading and District Natural History Society field trip, further specimens have been seen in Wokingham and Windsor Great Park.